Our first stop was at one of the oldest and grandest stepwells of Rajasthan at Abhaneri, and we really had no idea what to expect. It is an impressive well with sets of steps along each side, which gives the idea of an inverted pyramid. Since Rajasthan state is so arid, the design and final structure of Chand Baori was intended to conserve as much water as possible, keeping the water temperature cool, as well as providing a communal meeting place. 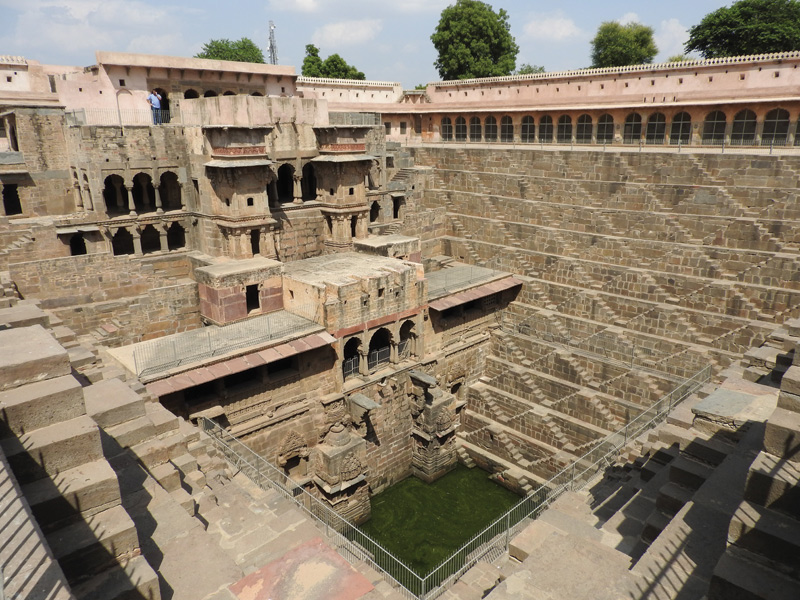 The day was conveniently divided with a welcome lunch stop at the Umaid Lake Palace and we took the time to explore its impressive grounds where many of the ingredients from our lunch were bred or grown. Before we left we were treated to a cooking demonstration. 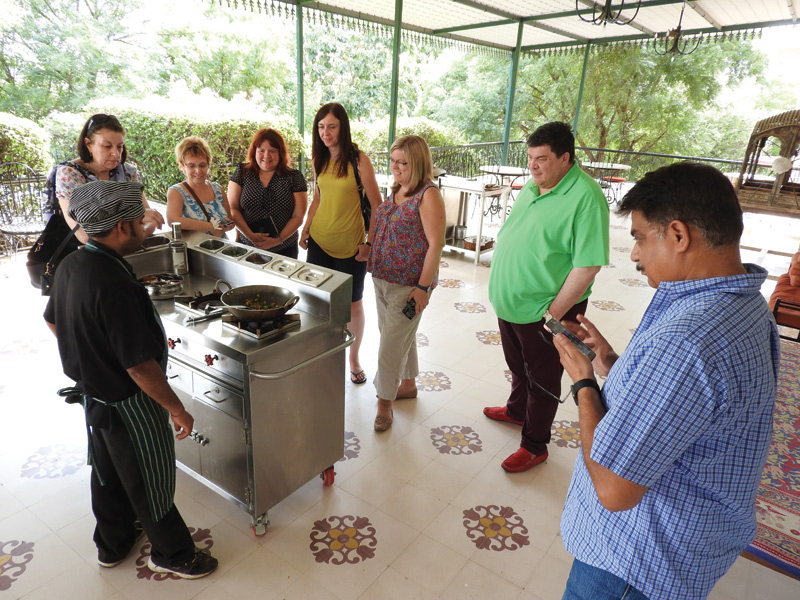 We continued on towards Jaipur where we had a wonderful dinner and show around of the Oberoi Rajvilas property and its impressive gardens, home to countless peacocks and parrots.

Our fifth day was to be our busiest, and I think whilst we had crammed so much in to our Golden Triangle itinerary, we could have benefitted from a three-night stay in Jaipur rather than two, to maximise our sightseeing opportunities combined with some rest and relaxation.

The famed walled city of Jaipur is still home to the Indian royal family This “pink city” is renowned for the buildings painted with a sandstone hue which reflects pink in the sunshine. We began the day with a photo stop at the Hawa Mahal, otherwise known as the “Palace of Winds”. This monument is one of the iconic façades of Rajasthani architecture. Royal queens, princesses and maidens used to observe official processions from behind the ornate windows.

A visit to the impressive Amber Fort followed. We had chosen to ascend to the heights of the fort in jeeps, although it is possible to make this trip by elephant, but none of our group wished to do this. The century-old fort houses the royal chambers of India’s bygone rulers, and nearby once descended from the fort, there is the opportunity to visit the Jal Mahal “Summer/Water” Palace by boat on Lake Man Sagar, which was apparently used for Maharajah picnics.

The afternoon ended up being quite a busy one! We began with a visit of the City Palace, where the Jaipur royalty still resides and comprises, amongst its many structures, a museum which allows you to acquaint yourself with the royal heritage and family heirlooms.

Next we visited the Royal Observatory (Jantar Mantar), a compound commissioned by the astronomy-loving Maharajah in the early 1700s. Here you will find sundials and stone instruments, created to decipher the calendar and astronomical tables. After all our sightseeing today, a bit of retail therapy was on the cards and the Baapu bazaar ticked the boxes for some of our group for finding those “must take back” souvenirs or traditional Indian clothing at great prices. We also had the opportunity to visit the Birla Temple which demonstrates the fascinating religious life of Jaipur, especially as its three unique domes aim to encompass those who follow Indian religions from different directions.

We had an unusual trip back to our hotel by tuk-tuk in the rush hour traffic – another nice little surprise!