Amanda and Justin from Somak hosted a great group of travel agents on an educational trip to experience the wonders of India’s iconic “Golden Triangle”, visiting the cities of Delhi, Agra and Jaipur.

Nothing can prepare you for the assault on your senses when you visit the amazing city of Delhi. From the exotic scent of aromatic spices to the sight of the colourful markets and the incessant tooting of car horns, you will be in for a unique experience. Delhi is a city of two halves, the old and the new, from the days of the early settlers, through to the Mughal, and eventually, British empires, before we get to experience the city that we see today. 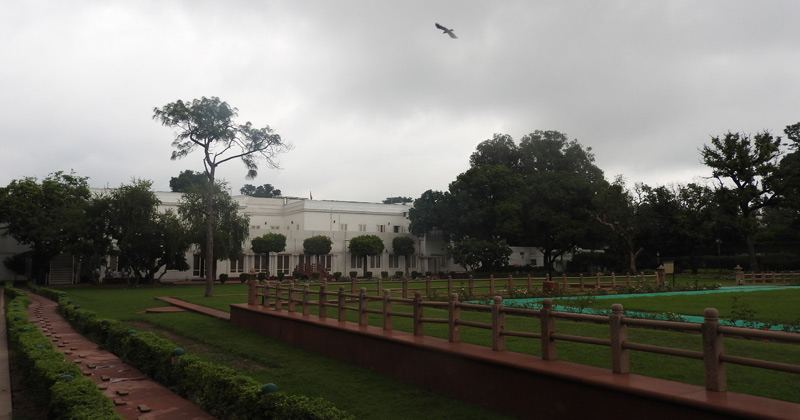 Our first stop as we passed through Delhi’s suburbs was to Gandhi Smriti, the memorial to Mahatma Gandhi, affectionately referred to as the “father of the nation”. This was the former residence of Gandhi in the final months before his assassination in 1948 on this very site. After a busy life in legal and political circles, Gandhi led India’s independence movement against British rule. The memorial,
including the room where he lived, is combined with a museum charting the history of his life and a set of footprints marks the path he took on that fatal day from his residence to his place of prayer.

We continued on to the area popularly known as Lutyens’ Delhi, due to the design and creation of the Parliament Buildings led by the British architect Edwin Lutyens under colonial rule. From in front of the impressive Rashtrapati Bhawan Palace, you have a spectacular view down the Rajpath, Delhi’s nod to Paris’ Champs Elysées, culminating in the sight of India Gate, which, akin to Paris’ Arc de Triomphe, commemorates the soldiers who laid down their lives in the World Wars. 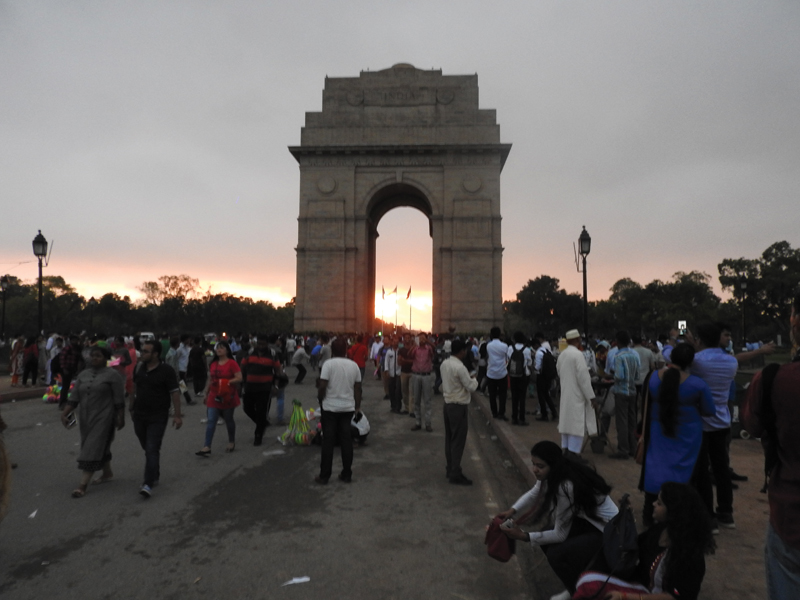 India Gate is a real focal point for locals to congregate. We arrived just before dusk and the crowds were already building. Families with children came to play in mini battery-operated cars, the street-food vendors were in attendance, offering a selection of hot snacks to nuts and candy floss, music was blaring from the speakers, and of course you could definitely find someone to sell you a bargain souvenir or two. Our final stop on today’s tour was a real highlight. We visited the Bangla Sahib Sikh Temple, impressive from the outside and beautifully ornate inside. We spent a few minutes taking in the music and orations during the on-going service before heading to the kitchens at the side of the temple. Every day 15,000 –20,000 people share a meal on long mats spread out in a huge hall. The food is donated voluntarily, and as such, is considered “blessed”. Therefore, you won’t expect to find Delhi’s poor here, but rather, extended families spending time together. 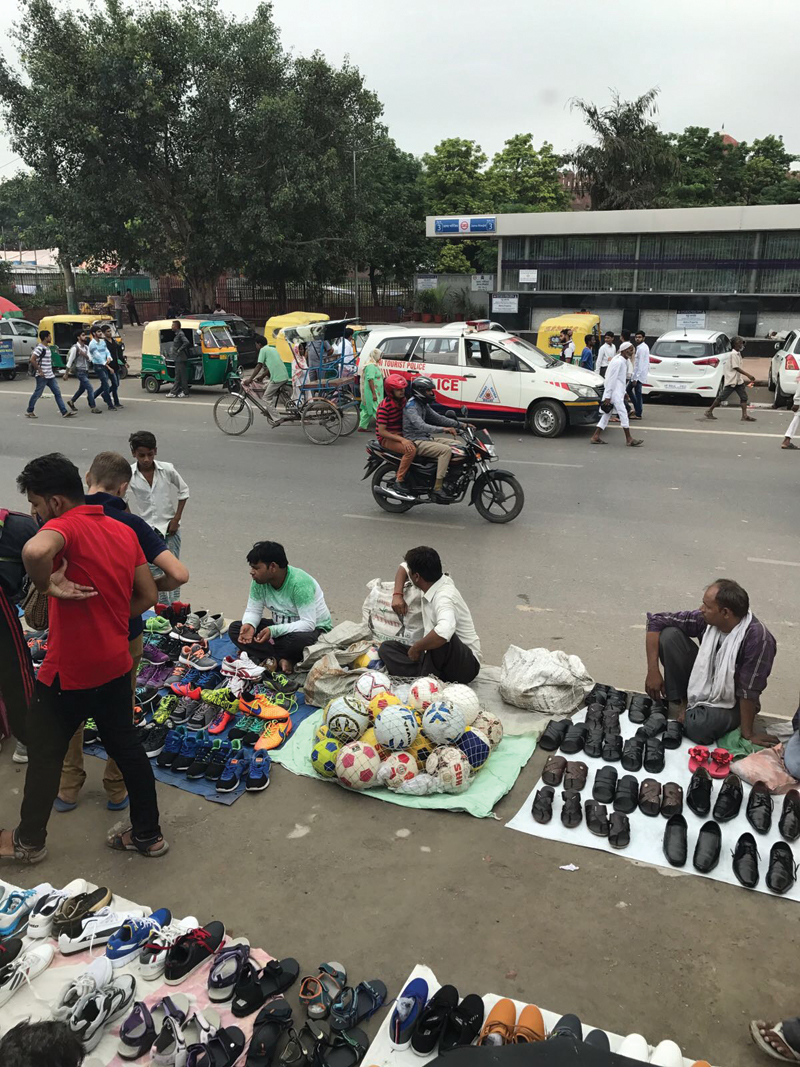 We passed the iconic Red Fort, and busy local markets offering a range of clothes and shoes, to fresh vegetables and spices. In no time at all, we reached the walls of the Jama Masjid Mosque, where we left our shoes and covered up our exposed limbs. The symmetry of the mosque was very evident and its importance as a symbol of continuing worship was also recognised. 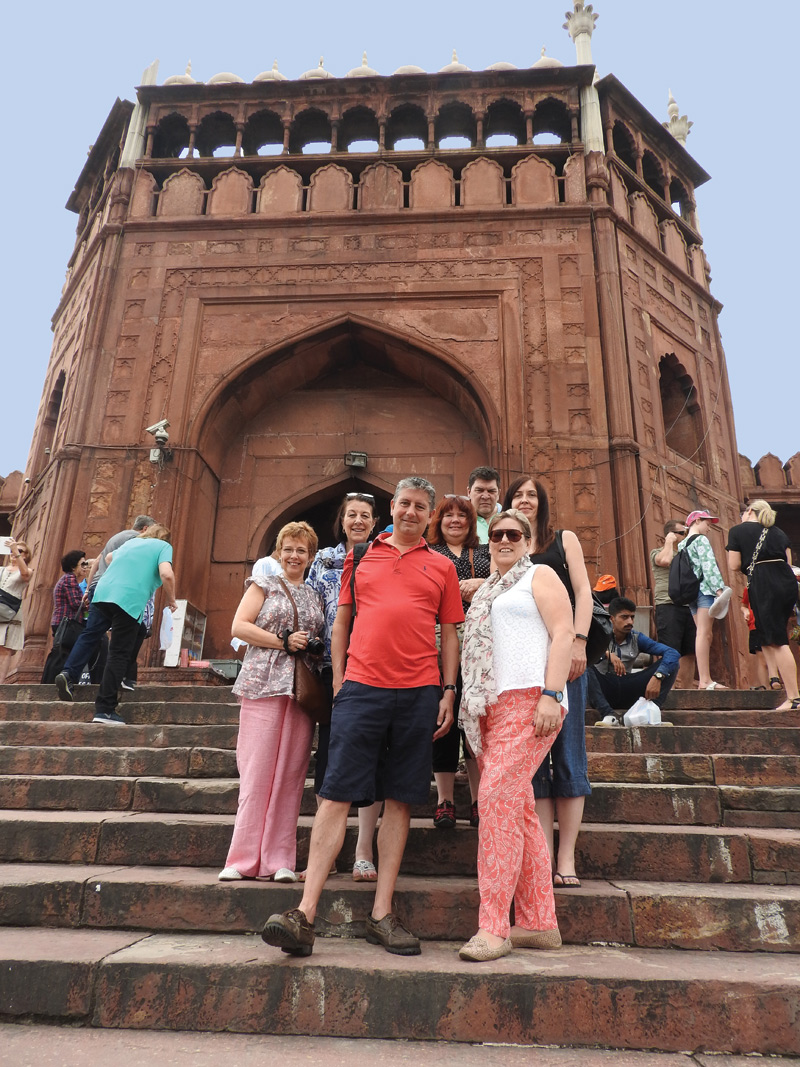 Immediately after this visit, rickshaws were claimed and we negotiated the narrow lanes of Chandni Chowk. Our driver jostled with oncoming rickshaws, motorbikes and market carts, while our eyes were drawn to the crazy mass of electric wires overhead, some of which were being used by monkeys as a convenient conduit across from one building to another above us. As our rickshaw made its way through the bustling market, our senses were now concentrated on the aromas of spices and the vibrant colours of the textiles and other goods on offer.